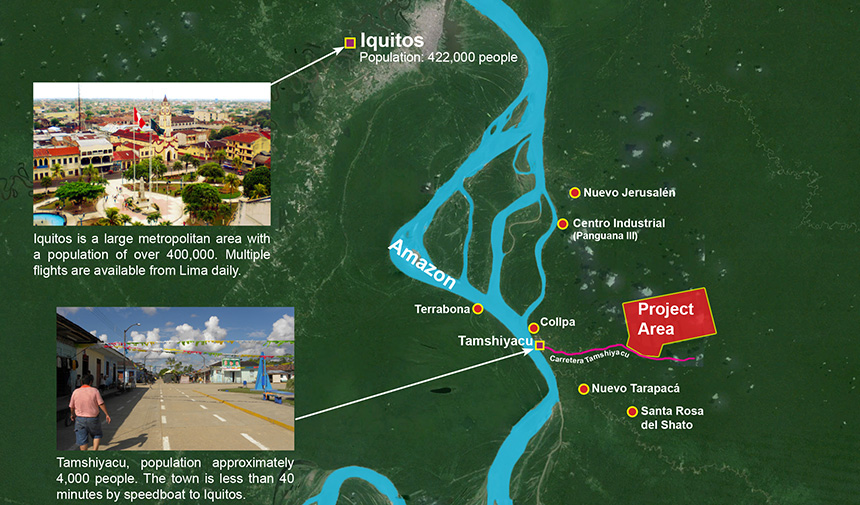 The Company, through its wholly-owned subsidiary, CDPN, holds approximately 3,760.5 hectares of titled, freehold land approximately eight kilometres by road from the town of Tamshiyacu. The Group maintains excellent relations with the town and is an active sponsor of social programs and community projects. The Group maintains an office in the town limits. The Group continues to consolidate land within its operating zone, and it is expected that by the end of 2015, this continued consolidation will raise the Group’s land ownership to in excess of 4,000 hectares in aggregate.

The estates are a short speedboat ride to Iquitos, the state capital of Loreto. Iquitos (population in excess of 450,000) is acknowledged as being the world’s largest city not connected by road. The city is well served by many airlines within Peru and boasts some international connections. There is also a PetroPeru refinery adjacent to the city which produces local diesel. The Directors believe that the close proximity of the estates to such a major city is a competitive advantage for the sourcing of materials and ease of access to the project site. The Directors also believe that the estate’s proximity to the Amazon River provides a low-cost river logistics system to move the cacao to market.

The Group purchased all of its land from private vendors and no land was purchased from government agencies. The original titles were allocated to the original vendors in 1997 by the Ministry of Agriculture; the original inspection documents at that time detail the existence of agricultural activities by these farmers. Furthermore, the titles were zoned under Legislative Decree 838 which provides for immediate and full agricultural development. The Group has not been involved in any change of use permitting or rezoning; in fact, the Group was notified on 14 November 2013 about the agricultural classification of the land and further confirmation on 9 December 2013 that “no change of use” was required. On 10 September 2013, the Group submitted its terms of reference for the environmental reporting documentation, known locally as a “PAMA”. The Group’s terms of reference for the PAMA were approved by the relevant authorities on 9 October 2013. As part of this PAMA, the Group’s community participation plan was submitted to the relevant authorities on 4 September 2014. The Group is currently waiting for the government authorities to approve certain soil studies; once these soil studies are approved, the PAMA can be submitted. We can not estimate when the relevant government authorities will approve the above mentioned soil studies and subsequently the PAMA. Possibly during 2016, the soil studies will be approved by the authorities. On 30 September 2014 and 26 March 2015, the Group won conclusive legal judgements with respect to litigation detailed in the prospectus.